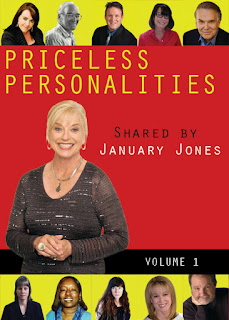 Leave it to radio personality January Jones to round up ten people who have a legitimate reason to whine but choose not to. In her new book, Priceless Personalities, Jones finds the inspiration behind the tragedy www.januaryjones.com

Readers will meet people like Tawana, a woman born without arms. Tawana shares her story about how JFK came to her rescue and the challenges that she has faced since that time. A guest named Jeannie uses the gift of laughter to help her recover from sexual and mental abuse. And then there's Sydney, also known as the Mayflower Madame, who found a way to move beyond the scandal to become a business coach.

Jones is no stranger to trauma, having become a widow with two young children when she was just 25 years old. Rising above the grief, Jones has authored many books including Thou Shalt Not Whine . . . The Eleventh Commandment http://www.amazon.com/s/ref=nb_sb_noss_1?url=search-alias%3Dstripbooks&field-keywords=thou+shalt+not+whine.

Now a self-proclaimed Humorist and Whine-Ologist, Jones uses a light hearted approach when dealing with guests and listeners who tune in to hear her radio show, January Jones Sharing Success Stories which airs on BlogTalkRadio http://www.blogtalkradio.com/januaryjones and TheIntertainmentNetwork.com http://w4cy.com/january-jones-sharing-success-stories-premieres-wed-may-1st-at-9-pm-et/.T

Jones has been named a “Featured Host” on BlogTalkRadio and her show has more than 1.3 million people listeners.

As if writing several novels, hosting a popular radio show, being a mother, a grandmother and a wife isn't enough, Jones is also a reality TV golfer. The show is aired on the World High Stakes Golf televised on HD Net. Check out Jones's chic golf style http://www.youtube.com/watch?v=FgQFnAOuf5s.

If uplifting stories, laughing, golf and fashion aren't your thing, Jones takes a walk on the serious side with several books about the Kennedys. Jones has been interviewed extensively on the subject of the behind-the-scenes relationships of the Kennedy Clan. For an interesting look at what was really going on in Camelot, pick up a copy of Jackie Ari & Jack: The Tragic Love Triangle or Oh, No….Jackie-O! & The Christina: The Oasis Odyssey or read about it on her website http://www.januaryjones.com/jjjfk.html.

I'm happy to announce advertisements for Yikes! Another Quirky Audio Book will be aired on show during the month of June. The sponsorship is in support of June Audio Book Month. Here's hoping you'll kick off the summer with a great audio book!