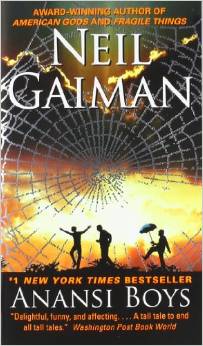 Fat Charlie has a problem. Not only has his father, Anansi, died leaving him stuck with a horrid nickname, but Fat Charlie's previously unknown brother, Spider, had popped onto the scene. Spider's appearance is far from joyful. Like Anansi, Spider has more than a few tricks up his sleeve, all of which leave Fat Charlie in a whole lot of trouble http://www.neilgaiman.com/works/Books/Anansi+Boys/

Anansi Boys was narrated by Lenny Henry, a well rounded actor with a long history of working with big stars like Tracey Ullman and David Copperfield http://lennyhenry.net/bio/
It was Henry's narration which really made this audio book work for me. I was amazed at smoothly and convincingly Henry was able to move from the American voice of Spider to the British voice of Fat Charlie.

Anansi Boys was a surreal story, much like Neil Gaiman's other works such as Stardust, Coraline
and The Ocean at the End of the Lane. Gaiman has a unique way of drawing people into a story, even ones that are fantastical. Anansi Boys kept me interested and entertained on a long road trip http://www.amazon.com/Neil-Gaiman/e/B000AQ01G2

The only thing about Anansi Boys that didn't work for me was that the ending lasted longer than my interest. I actually thought the last two chapters could have been eliminated altogether. Once I knew the characters were out peril, that should have been the end of it. Nonetheless, I am awarding Anansi Boys four our of five stars on my Goodreads Page https://www.goodreads.com/author/show/4673038.Adele_Park

Lenny Henry's narration work had a lot to do with my high ranking of this project on Goodreads. I'm looking forward to hearing what Henry will come up with next, as well as Neil Gaiman who I understand is coming out with a Halloween Book. Perfect!