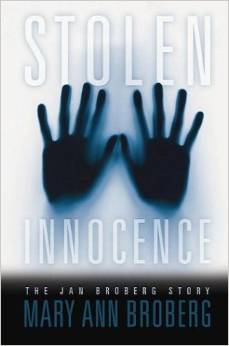 The first thing you should know in reading my review of Stolen Innocence: The Jan Broberg Story by Mary Ann Broberg is that I have a personal connection http://www.amazon.com/Stolen-Innocence-The-Broberg-Story/dp/0974515205

I had the honor of hiring Jan Broberg, an amazingly talented actress, to perform in an experimental audio book I produced many years ago. Despite the fact that Jan had been kidnapped twice as a child and abused by an adult male from her Church for many years, she grew into an amazingly beautiful, talented and well balanced individual. I enjoyed working with Jan immensely and would continue to hire her except she is living in Hollywood where she in enjoying a successful acting career. One of the projects Jan is working on now is a film adaptation of the book her mother wrote about the kidnapping
https://www.facebook.com/stoleninnocencedocumentary

No story about the abuse of a child is easy to read, but Stolen Innocence was especially trying due to the way the adults in the case had also been duped by the perpetrator, Robert Berchtold. The Brobergs met Berchtold family at their LDS Church and became fast friends. Sadly, Robert Berchtold used this friendship as a way of getting the Brobergs to trust him with their daughter.

When Jan was just 12 years old Berchtold offered to take her horseback riding. Her parents consented, but instead of horseback riding, Berchtold drugged Jan, tied her up in the back of a motor home and drove to Mexico. The two were gone several days before Jan's parents got the authorities involved. Berchtold had done such a good job in conning the Broberg family they couldn't imagine he would ever harm Jan http://www.suindependent.com/news/id_6500/Actress,-child-abuse-survivor-Jan-Broberg-speaks-out-with-new-documentary-Stolen-Innocence-.html

Even more astonishing, the Brobergs and the Berchtolds continued to socialize attend the same Church even after the authorities returned both Robert and Jan to their homes in Pocatello, Idaho. During the five weeks Bertchtold held Jan captive in Mexico, he brainwashed her into thinking she was supposed to bear his child or else her family would face terrible consequences. Because Jan already been kidnapped and sexually abused for many weeks, why would she have any reason to doubt this? As a result, Jan secretly continued to stay in personal contact with Berchtold.

A few years later, Berchtold once again kidnapped Jan, this time taking her to a Catholic school in California. Jan was eventually returned to her parents several months later and the story about the sexual abuse was finally revealed to them. Since Broberg came out with her story, six other women have come forward with claims of abuse at the hands of Berchtold. Unfortunately, these victims will never get the justice they seek because Berchtold took his own life when he was finally sentenced to serve jail time for his crimes against Jan.

The upside to this tragic tale? Jan was able to heal enough to reveal to her parents what really happened during the times when Berchtold held her in captivity. She must be one heck of a resilient person, because Jan has gone on to have a hugely successful career, appearing in numerous movies including co-starring with Elijah Wood in Maniac. To learn more about Jan, check out her Wikipedia page:
http://en.wikipedia.org/wiki/Jan_Broberg_Felt

Abuse stories are never fun to read, but they can help us grow and understand those who are affected by this horrible crime. I gave Stolen Innocence: The Jan Broberg Story by Mary Ann Broberg four stars on GoodReads https://www.goodreads.com/author/show/4673038.Adele_Park