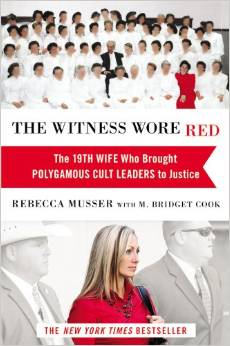 Those who watched the trial of polygamist cult leader, Warren Jeffs, are probably familiar with Rebecca Musser, one of the key witnesses. I recently read an account of Musser's role in the trial in the national bestseller, The Witness Wore Red, penned by Musser herself.
http://www.amazon.com/The-Witness-Wore-Red-Polygamous/dp/1455527831

I live about 40 miles from the “twin” cities of Hilldale, Utah, and Colorado City, Arizona. I see polygamist women in their prairie dresses on daily basis, wondering what things must be like in their secretive enclave. In Musser's book, the curtains are ripped open on this lifestyle, revealing a disturbing look at a community that marries off girls as young as twelve to much older men, many of whom are their relatives. Even more horrifying, several of these young girls were raped in front of adult men and women from the cult. During the trial of Warren Jeffs, the jury was able to listen to audio recordings of these crimes, so there is little doubt they occurred.

One thing that often gets overlooked in the polygamist saga is the fate of some of the young boys. In order for the older men to have multiple wives, a alarming number of boys are kicked out of the community, left to fend for themselves. Utah residents refer to these victims as “The Lost Boys.” In The Witness Wore Red, Musser talks about this tragedy, but makes the observation that the boys aren't “lost,” they are ABANDONED.

I understand there is a great deal of indoctrination that goes on in cults like the one in Hilldale/Colorado City. Nonetheless, this doesn't excuse all the rape, violence and child abandonment that is allowed by members of both parties in the sect. My personal beliefs are that the women who stood by watching while people like 12 year old Merrianne Jessop were raped by Warren Jeffs should have also been made to face charges. One of the worst perpetrators is Naomie Jeffs, one of an estimated 80 females married to Warren Jeffs. Prior to the trial, Naomie was on the run with Warren, working as his “scribe.” It was her duty to write down all of Warren's activities, including the crimes he committed against women and children. Naomie was with Warren when he was finally captured by police, but for some strange reason, she was never made to face charges for her role in these heinous crimes.

I commend Rebecca Musser for standing up for the victims during the trial against Warren Jeffs and some of his cronies who gave their young daughters over to Jeffs and took on child brides themselves. Musser escaped from the cult, only to be ostracized by her community, including some of her one family members. One of Musser's brothers wrote his own book, calling her a liar. I've seen numerous photos of Warren Jeffs kissing girls as young as 12 years old. The tape recordings of the rapes that took place in Warren's temple in Texas were authenticated in a court of law. It seems pretty clear to me who is telling the truth here.

Although reading The Witness Wore Red was a bit like watching a train wreck in motion, I gave it five stars on my Goodreads page. Any victim who has the strength and endurance to stand up to criminals like Warren Jeffs deserves all the respect and accolades in the world.
https://www.goodreads.com/author/show/4673038.Adele_Park