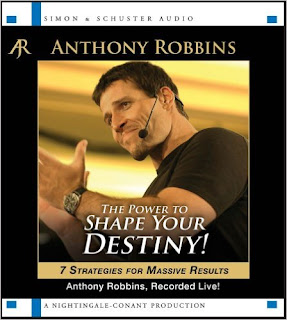 With as many self-empowerment books as I read or listen to as an audiobook, it's a wonder it took so long for me to discover Tony Robbins. Now that I've finally arrived, I'm a huge fan! I recently listened to The Power to Shape Your Destiny narrated by Robbins and released as a Nightengale-Conant Production http://www.amazon.com/Power-Shape-Your-Destiny-Strategies/dp/1442352655/ref=sr_1_1?s=books&ie=UTF8&qid=1436013654&sr=1-1&keywords=the+power+to+shape+your+destiny

The Power to Shape Your Destiny is a bit of a re-hash of Robbin's work called Unleash the Power Within http://www.amazon.com/Unleash-Power-Within-Personal-Transform/dp/1442352663/ref=pd_bxgy_14_img_y
But it was well worth it for me.

I'm always up for a refresher course – sometimes I need to hear the same thing over and over before it sinks in. What really stood out to me in this latest audiobook was the idea that while trying to achieve a goal, most humans tend to just try one or two things and then give up if it doesn't work out. Robbins points out that anything can be achieved if someone had a compelling reason to make it happen. Once a person decides they must achieve their goal rather than they should do it, success if on the way.

I'm in the process of working on one of those goals which most people think is nuts. Robbins would disagree. He points out that anything is possible if there is a will to make it happen. After listening to The Power to Shape Your Destiny, I decided the next time I get “stuck,” I'll write up a list of all the things I haven't tried and see where that gets me.

One of the things I like most about Robbins is that he is a no-nonsense, straight-shooter. I haven't had the chance to go to one of his conferences, but that's on my “to do” list for sure! https://www.tonyrobbins.com/

Until then, I'll keep listening to Robbin's audiobooks. Up next: MONEY: Master the Game: 7 Simple Steps to Financial Freedom http://www.amazon.com/s/ref=nb_sb_noss_2?url=search-alias%3Dstripbooks&field-keywords=tony+robbns