Too bad loosing weight isn't as much fun as gaining it! As is my custom, I went “Hog Wild” over the holiday season. Part of this is due to my insistence on making homemade sweets for practically everyone on the planet. I have a friend who calls this well intentioned gesture bing a “Pusher,” but that's a topic that needs to be explored in a future article. For now, suffice to say I made and ate an alarming number of sugary confections.

2016 brought with it an estimated seven to eight pound weight gain. Gasp! That's a hell of a lot of extra junk in the trunk!

There are a plethora of diets out there, but at the end of the day, losing weight boils down to eating less and exercising more. Some people can be extremely disciplined when it comes to food. Unfortunately, I'm not one of them. On the flip side, I'm great about exercising (I have an adrenalin addiction which requires a daily fix).

I have a strange habit of feeling depressingly deprived when I don't allow myself to eat the foods I love. For me, the best way to lose weight is to implement portion control. Like a lot of people, I can starve myself for a few days to drop some emergency pounds, but that never works over the long haul.

As I was preparing to start a new year, an article was brought to my attention that offered a simple solution to shedding unwanted blubber. A life coach suggested that people who want to lose weight should concentrate on just dropping one pound a week. While that doesn't seem like a very lofty goal, if maintained, a person could lose almost 50 pounds a year!

I decided to try this pound a week method to see how it works. After all, losing just one pound in seven days should be easy if I cut back a little on what I'm already eating. In fact, I can probably breeze through losing a pound a week for two or three weeks simply by making minor adjustments in my eating habits. I suspect the hard part will come around week four when cutting back on certain foods isn't enough to maintain the weight already lost while continuing to drop one pound every seven days.


If I stick with my experiment for two months, I hypothesis that at some point I'll have to make some actual behavioral changes in order for this to work. And that is the ingenious part of this approach: I don't have to make a bunch of radical changes all at once. I can make gradual changes, easing myself into better eating habits. I have no idea if I will be successful, but I've decided that if I make myself be accountable by writing a post every week, I'll increase my chances of decreasing my waistline. Stay tuned to see how it all shakes out, or off, as I hope the case will be! 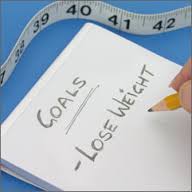