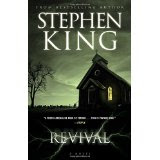 
I am awarding Revival three out of five stars on Goodreads https://www.goodreads.com/author/show/4673038.Adele_Park