Book Review of The Boys in the Boat 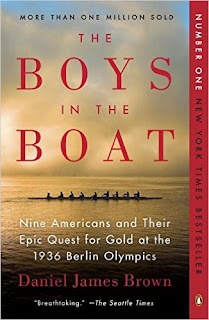 If I had to describe The Boys in the Boat by Daniel James Brown in one word it would be “inspired.”
http://www.danieljamesbrown.com

This true life story is about nine working class boys from Washington State whose oar crew competed in the 1936 Olympics headed up by Hitler. Rowing isn't a sport I've ever tried or even been interested in watching. However, due to the deft writing skills of Brown, I found myself cheering for this team from it's humble beginnings to the pinnacle of their success in Berlin.

Taking center stage in this saga is Joe Rantz, a young man who was abandoned by his family. His story is heart-wrenching to read, but all the more enjoyable when Rantz emerges as a victor.

Although I knew the outcome of this story, Brown is so skilled in the way he presented it, I found myself on the edge of my seat at times. This is the mark of a truly great writer.

By the end of the book, it would be hard to think anything other than, “Hooray for The Boys in the Boat!”


I have awarded The Boys in the Boat by Daniel James Brown four out of five stars on my Goodreads Page https://www.goodreads.com/author/show/4673038.Adele_Park