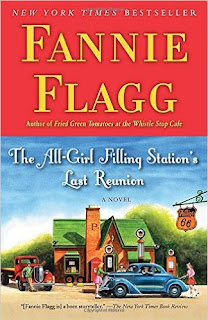 They say you should never judge a book by it's cover, but that's exactly what I did when it came to The All-Girl Filling Station's Last Reunion by Fannie Flagg. And why not? The cover was done up in bright colors featuring a pleasant, old time drawing of cute girls on roller skates pumping gas. And with Fannie Flagg as the author, what could possibly go wrong?

Things started well enough with this novel which opened with Mrs. Sookie Poole trying to deal with her insufferable, domineering mother. Nicked named “The Winged Victory,” Sookie's mother, Lenore, should have been hysterical. Unfortunately, that's where the good times ended for me. Lenore turned out to be more annoying than funny, so I was happy when the story revealed that Sookie had secretly been adopted.

The plot then shifts back to 1939 when the Jurdabralinski family opened Wink's Phillip's 66 in Pulaski, Wisconsin. When the U.S. Enters World War 11 after the bombing at Pearl Harbor, Wink, the only eligible male in the Jurdabralinski family, goes off to serve as a pilot. His sister, Fritzi, has also learned to fly, but she stays behind to help her sisters run the gas station.

Fritzi goes on to join the WASP program which involves female pilots who are not commissioned in the Armed Services, but who work ferrying planes from the factory to the army bases for the men to fly. Fritzi's other sisters eventually join her in the WASP program and the reader gets a behind-the-scenes look at a system which paved the way for future female pilots.

I enjoyed the history lesson, but not the story itself. It seemed disjointed as it ping-ponged back and forth between the Jurdabralinkski family's history and Sookie's desire to know who her real mother was. I won't spoil the outcome, but that too was a bit disappointing, even though it did feature an unexpected twist.

I have no doubt that Fannie Flagg is a truly gifted author. In fact, Fried Green Tomatoes at the Whistle-stop Cafe was one of my favorite books. I can remembers laughing out loud as I read this novel, so I was sadly disappointed by The All-Girl Filling Station's Last Reunion.