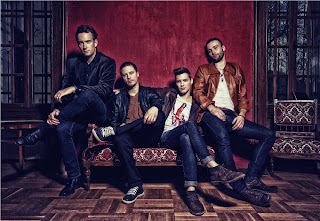 The wonderful thing about the internet is that it allows people from all over the world to connect and share ideas. I had the pleasure of appearing as a guest on Mark Manney's podcast, Chasing Dreams, which he records and edits from his studio in Slovakia http://www.abscondo.com/

Manney allows his podcast to be used as a platform to discuss ideas and tips on achieving goals. Using an easy-going interview style, Manney invites guests to talk about overcoming obstacles and ways to stay motivated. As the frontman in the band, Abscondo, as well as the author of “Love it or Leave It: The End of Government as the Problem,” Manney is no stranger to accomplishing great things in a crowded media market.

Formed in 2012, Abscondo has already been met with great success. The group performs regularly for large audiences in Slovakia and was even featured on a popular TV show. Listeners can check out the band's debut release, “Strangled Into Gray,” for free on the Abscondo website http://www.abscondo.com/ Plans are underway for a new release this year as the band readies for an international launch.

“Love it or Leave It” is a political read which strives to solve the fallacy that government can be ended through government. Directed at Conservatives, “Love it or Leave It” outlines a plan Manney calls “The Total Freedom Act.” Manney has a very interesting YouTube video to promote the book
http://www.youtube.com/watch?v=SkehBSqfRqk

In a world where most people are too busy talking about themselves to listen to the ideas of others, I found the Chasing Dreams Podcast to be a breath of fresh air. Find out yourself by tuning in https://itunes.apple.com/podcast/the-abscondo-podcast/id365257106
Posted by Adele Park at 6:37 AM