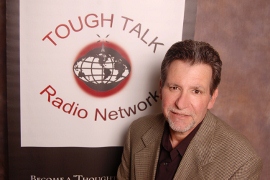 When it comes to sound business advice, sometimes you need a little tough talk. That's where the Tough Talk Radio Network comes in http://toughtalkradionetwork.com/. Founded by Tony Gambone,
Tough Talk offers a number of different shows hosted by business leaders interested in growing their companies and helping others to do so as well.

Tough Talk began three years ago when Gambone started networking with members of the business community in the greater Houston area. Gambone launched an internet radio show which he generously allowed entrepreneurs to use as a way to showcase their projects. Since that time, the Tough Talk Radio Network has added eight more on-air personalities, increased the number of shows being offered and is in the process of expanding even farther.

Gambone's show Airs on Thursdays at 2pm Central Standard time
http://www.blogtalkradio.com/toughtalkradionetwork and includes interviews with marketing experts, authors, money coaches and people involved with social networking. Anyone looking to get their content effectively delivered to the public will find a host of useful tips on this show. I've had the pleasure of being Gambone's guest on two most occasions. Most recently, I appeared on Tough Talk to promote Yikes! Another Quirky Audio Book. Not only did Gambone allow me to an opportunity to visit with his listeners, but he also shared some insightful comments on how to best promote my products. Tune in to hear the interview http://www.blogtalkradio.com/toughtalkradionetwork/2013/01/03/tough-talk-wtony-gambone-w-guest-adele-park-mike-oneal