A Note from Adele Park:  Today I have the opportunity to let my blog readers know about a great new book called The Bacchae -- A Myth ReTold by Christy Potter.  This exciting new novel promises adventure and intrigue.  I would encourage everyone to give it a look. 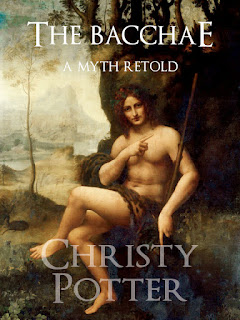 The Bacchae is available in paperback or as an e-book from me directly at ChristytheWriter.com or on Amazon.