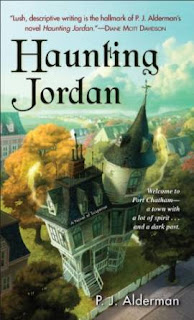 
Alderman has a second novel also set in Port Chatham called Ghost Ship. Once again, Jordan Marsh finds herself with a murder mystery to solve. I couldn't resist ordering this book to continue on with my Halloween reading
http://www.amazon.com/Ghost-Ship-Port-Chatham-Mystery-ebook/dp/B004CFB03K/ref=sr_1_1?ie=UTF8&qid=1443391881&sr=8-1&keywords=ghost+ship+by+p.j.+alderman