Leather to the Corinthians by Tom Lucas


An Apocalyptic War between Fast Food and Free Will Arises! 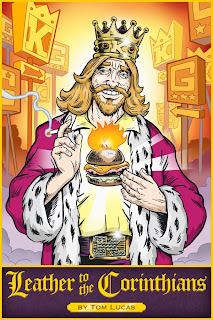 Synopsis
Gather round all you tattooed, lost soul wandering, Wi-Fi/Lo-Fi mutants! Come! Come
listen to the hypnotic beat of my drum! Join me on trip to the Village, a strange and
surreal place, where an epic battle will determine the fate of the human race! The
GENERAL is determined to win this war as the insane clown insurgent wants to settle
a score! He’s got a bone to pick with his nemesis the KING, the mad ruler of the
Village who only cares about celebrity status and bling! You will meet a young
SOLDIER, who fights to survive the melee, as he loses his humanity along the way!
Leather to the Corinthians is an absurd postmodern fable that defiantly flips a middle
finger at modern American life. Through the perspectives of its multiple characters, it
explores the absurdities of organized religion, the military, big business, fast food,
advertising, sex, and the media. Witty, with bitter undertones, its story possesses a
satirical spirit as it plays with traditional story structure, phrasing and cultural
references. Its multiple layers encourage return visits as its characters have many
more unique tales to tell.
Learn more about Tom Lucas by visiting his blog: www.readtomlucas.com
Paperback: 6x9 Pages: 284 ISBN-10: 0988526107 ISBN-13: 978-0988526105
LCCN: 2012919854 Language: English List Price: $12.99
Copyright 2012,Tom Lucas; First Edition BISAC: Fiction/ Science Fiction/Apocalyptic &
Post-Apocalyptic; Fiction/Science Fiction/Military; Fiction/Dystopian; Fiction/Satire
Release: December 2012 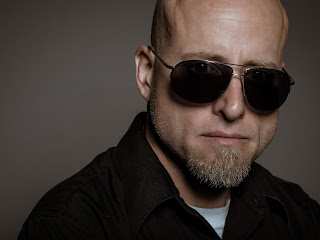 Excerpts
“The King untied his cheesy cape and removed his fake beard. Strangely, suspenseful music began playing through the castle's public
address system. Stripping down to his fresh underwear, the King then bolted down the dimly lit hall to the escape pod at its end.
Popping the pod's stay-fresh seal, the King snuggled into its cockpit. Years of preparation led him through the launch procedures and
soon the pod was airborne, flying through the hazy sky.”
“With the high holiday of Yeaster quickly approaching, Father Everhard contacted his publicist in order to promote his latest production
of The Passion Play of the Red J. As the highest ranking local representative of the faith, it was Everhard's job to create big
attendance numbers for a stellar performance…. Father Everhard stood up in the green room of the Village's favorite religious squawk
shows, From Nuts to God. Each week several handfuls of viewers tuned in for redemption and other valuable prizes.”
“ConPollo held a meeting with his new team. As he sat before his troops, he pondered the mission that they were about to
undertake…The screaming throng of actors who, of course, really wanted to direct, stormed off towards their target. ConPollo sprinted
after them to keep up. It was all he could do to follow his highly energized method actor army.”
“The Soldier was now truly sentient...His brain was flooded with sensory information. His eyes viewed an H.U.D. that provided him
with layer upon layer of information….His mind seemed to move more quickly, its ability to analyze stimulus was far beyond its normal
scope. In what would have taken minutes to sort out before, occurred in milliseconds for him now.”
“The Sixth and final Seal is the big doozy, the ultimate kick in the pants: the Take-Me-Away-Born-Again Rapture Fiesta. At this point
nothing matters— steal a TV…return your movies late…eat fatty foods…act like Scott Baio in the morning… the President will
announce full disclosure…there is a freaking meteor about to hit Earth and life expectancy has gone from 74.5 years to roughly ten
minutes or so.”
Praise for “Leather to the Corinthians”
" A perceptual Pandora's Box cracks open as one gets a sense of being transported into a surreal, video game-like, sci-fi
world where consumption and confusion rule...A cerebral roller coaster ride that keeps readers on their temporal toes!" -
Between the Lines
"Hunter S. Thompson meets Monty Python meets the Marx Brothers meets Naked Lunch...A punning pastiche of the
verbal kitsch of late twentieth/early twenty-first century America" – IndieReader
"Leather to the Corinthians is a relentless and sprawling metalingual allegory reminding us to step back and examine our
fast-food culture, and insta-grab reflexes." - Z. Massad
"Leather to the Corinthians" is like a slightly more coherent and tightly structured Naked Lunch, infused with the same
kind of surreal satire and black comedy that William Burroughs so brilliantly employed.” -M. Seminara
"Leather is an all-purpose tome for the jaded, overworked, underpaid, and exhausted members of society…. An
interesting mix of sci-fi and satire makes this a book that could become the next cult classic!” -V Janik
About the Author
“Leather to the Corinthians is my response to an insane world. I was not born into an influential family. I am not a
member of the Star Chamber. I don't have many opportunities to directly create change. I do have my voice, and that is
what I have chosen to use. If you are fed up with the ridiculousness of big business, politics, mass media, fast food,
organized religion, et al...if you enjoy underhanded satire, science fiction, fantasy, the surreal, comic books, video
games, and a good laugh -- you'll dig my book.” -Tom Lucas
Official Websites:
Blog: www.readtomlucas.com
Twitter: @readtomlucas
Facebook: Tom Lucas (author)
Fan-Demonium: www.churchofthebigredj.com
Videos & Multimedia:
Youtube: http://www.youtube.com/user/Room1331
Soundcloud: https://soundcloud.com/readtomlucas